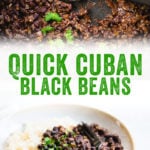 Ever had Cuban black beans? Our friend Dan (who Larson calls “Tio”, Spanish for uncle) has a bit of Cuban heritage and recently visited Cuba. The other day we set about to create a Cuban black beans recipe with him. Our goals: to make it quick enough for a weeknight dinner, but bring in as much of the Cuban back beans flavor as possible. And since we eat a mostly plant based diet, make it vegetarian too. Hence, our quick Cuban black beans recipe was born! We’ve used canned beans as a shortcut to cooking dried beans, but kept that Cuban style black beans essence. Keep reading for the recipe we created together, and how to make Cuban black beans.

There is lots of contention over how to make Cuban black beans in the most “authentic” and “best” way. While this recipe is not authentic, it takes cues from traditional Cuban black beans recipes. Our friend Dan who helped us with the recipe has Cuban heritage, but he also grew up in Texas. His family’s Cuban black beans recipe includes jalapeño pepper and garlic, so we’ve added that in for a little fusion flavor as well. (If you’re looking for a straight up authentic, try these Cuban Black Beans from the New York Times; they’re more involved but more true to the authentic methods.)

Cuban black beans and rice is a very humble, straightforward dish. Many authentic recipes use a ham hock for flavor; since Alex and I cook mainly vegetarian and vegan meals on a regular basis we’ve made this recipe vegetarian. To mimic the richness of meat, we’ve used some butter to sauté the veggies and beans. (If you eat a vegan diet, you can use olive oil.) Also most authentic Cuban black bean recipes cook the beans from dried. To save a bit of time and convert this recipe into a “quick” weeknight meal, we’ve opted for canned beans here. (Plus, that’s what Dan’s family does!)

To make our quick Cuban style black beans recipe, it’s pretty simple. Just mince onion and green pepper (chop them into a small dice) and mince a bit of jalapeño and garlic. Saute them all up, add the beans, and cook it down for a while until it becomes thick and saucy. The flavor that results is super savory, silky, and addictingly good. Serve it up with some rice (white or brown), and it’s a humble meal that tastes like a million bucks.

After taste testing against black beans from our local Cuban restaurant, Dan even preferred this Cuban black beans recipe! We hope you enjoy it as much as we did; let us know in the comments below. And here are lots more bean recipes, if you love beans like we do!

Outside of this Cuban black beans recipe, here are a few of our favorite vegetarian dinner recipes:

This Cuban black beans recipe is…

Vegetarian and gluten free. For vegan, plant-based, and dairy-free, substitute olive oil for the butter.

*Note: The garnish we used was not traditional but added a little color: we diced a tomato and mixed it with some kosher salt and chopped cilantro.