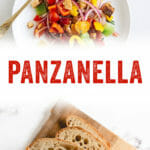 Summer always seems to slip away, doesn’t it? August is nearly gone, and we feel like we’ve barely scratched the surface of our summer checklist. Trip to beach in Michigan? Berry picking at a local farm? Guess it will wait until next year. But one thing we have done: made this panzanella recipe. Panzanella is an Italian bread salad, and it’s everything summer! Ripe tomatoes, basil, bell peppers, and garlic are mixed with crunchy bread and a garlicky vinaigrette into an incredible salad. My, oh my. It’s a family favorite, over here.

How to make this panzanella recipe

Luckily we have another month of tomato season here in Indiana, so we can continue to enjoy the tastes of summer. When ran across some lovely multi-colored cherry tomatoes and bell peppers at our local farmers market, and were inspired to make a panzanella recipe.

What is panzanella? Panzanella is an Italian bread salad that combines dried, crusty bread squares with fresh vegetables and a vinaigrette. It’s a genius idea for using up old bread, and extraordinarily delicious. You can use any fresh veggies you have on hand. The traditional vegetables used in a panzanella recipe are tomatoes, peppers, red onion, and sometime cucumber. Our version of a panzanella looks even more vibrant than most because we used multi-colored cherry tomatoes and three colors of bell peppers.

Here are the basic steps on how to make this panzanella recipe (see below the full recipe):

We used this recipe to help break in our new kitchen with some friends (a sneak peak is here, but we’ll be posting a series about the reno in several week). What’s your favorite summertime dish?

Get the best cherry tomatoes you can find

Buying local tomatoes helps support your local farmers: so if there’s a chance to do so, we heartily recommend it. Please do not even think about using off-season, mealy pink tomatoes. The flavor here is 100% dependent on the quality of your tomato!

Basil is easy to grow at home: and it’s very hardy as long as you place it in full sun! Basil adds an aromatic flavor to such a wide variety of recipes, and growing it at home is much cheaper than buying it at the store. If you’re looking to grow your own basil plant, we have a step by step guide here: How to Grow Basil.

This panzanella recipe would be great for a potluck (as long as it doesn’t sit out for hours!). Here are a few more easy potluck recipes:

This panzanella recipe is…

This panzanella recipe would also be a fabulous side dish for a grilled meal. Here are a few more grilling ideas for creating a menu: