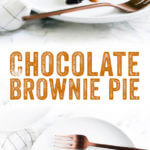 This brownie pie recipe is fudgy and decadent, with a salted tahini maple sauce that puts it over the top! Add it to your repertoire of delicious gluten free desserts.

Fudgy flourless brownie pie…need we say more? This decadent chocolate dessert recipe is from the book Black Girl Baking by Jerrelle Guy, creator of Chocolate for Basil. It’s quickly becoming one of our favorite baking cookbooks. Instead of judging a book by its cover, Alex and I judge a cookbook by how many recipes we immediately want to try while paging through it. And after just a few pages in, our list of must makes was growing buy the minute!

Blue Blueberry Drop Biscuits, Everything Chickpea Turmeric Crackers, Macadamia Brown Butter Cashew Cookie Dough…the recipes are inventive and the photography is outstanding. But more importantly, this is a special book because it’s not just a baking cookbook. Author Jerrelle Guy has included deeper themes that go way beyond baking. Keep reading for a special interview with Jerrelle and the brownie pie recipe!

An interview with the author, Jerrelle Guy

1) You are an accomplished cook as well as a baker. What is it about baking that made you want to write an entire book of baked recipes?

This book is less about baking and more about self-expression and crediting the process (toward loving ourselves as we are). Food and cooking are political and offer up a lot of information about our identities and family histories. I used baking, something that feels more universal because of the simple flour-butter-eggs-sugar template, and then attempted to play around with those ingredients–adding, substituting. In that playing process, using my hands and revisiting my memories, I revealed a lot about my own personal story, but hopefully showed how food and ingredients and the process of recipe creating can be very revealing about where you are on your journey, where you’ve been and who influenced you the most. I want to encourage people to get into the kitchen and play, and share whatever they find proudly.

2) You’ve said your recipes are “a mishmash of my life: my black roots, Chamorro food, the Caribbean islands that were my neighbors.” Are there a specific few recipes that speak to that fusion?

In the book definitely The Papaya Pastries, The Jamaican Patty Pot Pies, The Bananas Foster Lumpia—and I try to explain how I merged them all during the recipe development stage in the recipe intros.

3) Your book cover says that growing up as a sensitive child in a race conscious space, you’d rather spend time eating cookies than taking on the weight of worldly issues. It helped you see that “good food is the most powerful way to connect, understand and heal.” What is it about food that does this?

Anytime there is food involved in a social setting it makes walls drop and boundaries dissolve, because we all eat, and often times you can find more commonalities in our rituals and comfort foods than you can find differences. I organized the book by the senses to speak to this. Beyond identifying with a recipe’s name or photo, you might be able to identify with a specific texture or smell that immediately brings you back to your childhood and a feeling of being at home and safe.

4) You attended the Gastronomy program at Boston University: why did you decide to go, and what’s a major theme you’ve learned?

Gastronomy is essentially Food Studies. I decided to go because I wanted to understand the depth of the work I was doing and I wanted to understand myself better and why my connection to food has always been so strong. I focused on African American Foodways, and something I learned was the lack of black representation in American food, and in the food world in general despite the major contributions black hands have made. It was a big reason for titling the book what I titled it.

All about this brownie pie recipe!

This brownie pie recipe has simple ingredients and some standard baking techniques: creaming together butter and sugar, using a double boiler to melt chocolate, and whipping egg whites to fold gently into the batter. If you’re not a baker follow the instructions carefully: if you bake regularly this will be second nature.

This brownie pie recipe also uses espresso powder, which is a baking trick to make the chocolate flavor pop. We’d recommend finding some if you can (ours was DeLallo brand!). Also, if you substitute coconut oil for the butter, which we tried; you may need to lessen the baking time a bit (45 minutes was a hair too long in our oven!). Next time we’ll try it with butter since we aren’t dairy free ourselves: the texture would be even more fudgy!

Related: What is Tahini?

This brownie pie recipe is one of our favorite gluten free desserts; here are a few more from A Couple Cooks!

This brownie pie recipe is…

This brownie pie recipe is fudgy and decadent, with a salted tahini maple sauce that puts it over the top! Add it to your repertoire of delicious gluten free desserts.

For the brownie pie

For the tahini maple spread

Reprinted with permission from Black Girl Baking by Jerrelle Guy