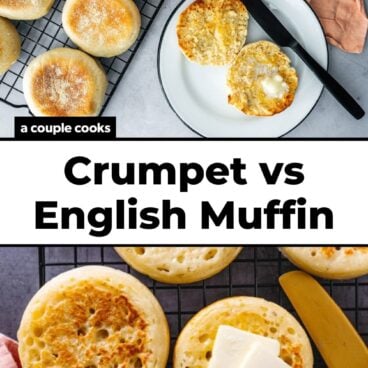 Crumpet vs English muffin: what’s the difference between these two small round breads? Here’s what you need to know (plus recipes).

Crumpet vs English muffins: what’s the difference? These two small round breads are about the same size and use similar ingredients: but they’ve got some major differences. Are they both cut in half? Are they both English? Here’s what you need to know about these popular breads: and a few recipes if you’d like to try your hand at making them at home!

A crumpet is a traditional English round bread made with flour, milk, and yeast and cooked on a griddle. The surface of a crumpet has delicate round holes, bubbles from the yeast that rise to the surface during cooking. They’re often served topped with butter, jam, clotted cream, or honey as a traditional tea time snack. They’re popular in the UK and other former British territories like Canada and Australia.

What are English muffins?

An English muffin is a small, savory round bread that’s served cut in half and toasted. Despite the name, it was actually invented in America! A British immigrant named Samuel Bath Thomas invented the English muffin in 1894 in his New York bakery. He first called it the “toaster crumpet,” so it’s a variation on the popular bread he was used to in the UK. It caught on as a more elegant version of toast, and is a popular American breakfast item to this day.

Here’s a breakdown in the similarities and differences between these two round breads:

Recipes for crumpets and English muffins

You can make both crumpets and English muffins at home: and they’re extremely tasty homemade! Of course, you can also find them easily at major grocery stores (in America, look for crumpets in the frozen or refrigerated section). Both breads are a fun project and take about 2 hours to complete. Go to:

For the English muffins: