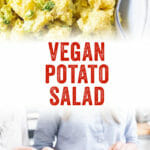 Ready for the best vegan potato salad? We’re not just saying that (promise). You know, that potato salad your Grandma makes, or you get at the veggie deli counter? This one is just like it. Except, it’s made of plant based whole foods. And it tastes even better than the mayo-laden glop that sometimes graces summer pitch-ins! We’ll show you how to make vegan potato salad like your grandmother did it, but with a few tricks to make it vegan. Ready to get started?

The secrets to vegan potato salad

Of course, you can use storebought vegan mayo to make a vegan potato salad. Which, is pretty easy to find these days! But instead of mayonnaise, our secret ingredient in this vegan potato salad is…cashews! That’s right, we’ve made a vegan cashew mayo and man is it good. (Here are a few more examples of creamy cashew recipes…)

Now, for this vegan potato salad we wanted to create the classic American style potato salad. You know, the kind your Grandma makes, or the kind you can pick up from the grocery deli counter? We did quite a bit of research into classic picnic potato salad, and here are our other secrets:

The best way to learn how to make something? Watch how it’s done! Here’s a video of Alex and me making this vegan potato salad in a collaboration series with our friend Tessa of Handle the Heat.

How to serve it!

This vegan potato salad was a huge hit in our family — and beyond! Our two-year-old Larson absolutely adored it. A dear friend of ours has declared it her favorite potato salad: ever! She makes it often in the summers and it’s always a huge hit with her family! Basically: all signs point to delicious on this one. How to serve this potato salad? Here are a few ways we’d recommend:

This vegan potato salad saves well! It actually gets better in the fridge. Keep leftovers refrigerated for up to 5 days. Or, you can make this salad ahead up to 2 days in advance.

This vegan potato salad recipe is…

For the potato salad

For the cashew mayonnaise

Outside of this vegan potato salad with cashew mayo, here are a few of our favorite salad recipes: