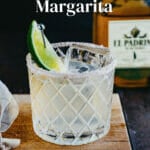 This agave margarita recipe is sweetened to perfection with agave nectar, giving this classic cocktail a little upgrade!

Looking for a margarita that’s perfectly sweet tart? Try this Agave Margarita! Typically we’re purists about our margarita. We use the classic definition: just lime, tequila and triple sec. But add a hint of agave, and it’s that much better. Agave nectar is a natural fit with the drink, since tequila is also made with agave! It deliciously nuanced with an air of sophistication. Here’s how to make it!

What’s in an agave margarita?

The agave margarita is a spin on the classic Margarita, one of the most popular classic cocktails of all time. Invented in the 1930’s, official definition of the drink is simple: tequila, lime and triple sec (or Cointreau). This simple marriage of ingredients tastes well beyond its 3 ingredients! In fact, many bars and restaurants add too much sweetener in their margaritas, making them taste overly sweet and one note.

This agave margarita has a splash of added agave nectar for sweetness: but just enough! It’s only ½ ounce (1 tablespoon), so it doesn’t overpower the other flavors in the drink. Here’s what you need for an agave margarita:

What is agave nectar? What’s the difference vs agave syrup?

Agave nectar is a sweetener made from the agave plant. It tastes like a combination between maple syrup and honey. It’s made from several types of agave, including the same type that’s used to make tequila (blue agave).

What’s the difference between agave nectar vs agave syrup? Agave nectar is produced similar to how maple syrup is made: the sap from the center of the plant is extracted and boiled down. In contrast, agave syrup is technically modified similar to the way high fructose corn syrup is made. However, many people use the terms as synonyms so they are often used interchangeably, even on product labeling.

Do you need the Triple Sec?

Yes! Triple Sec is a category of dry orange liqueur that’s used in many cocktails, most famously the margarita. Cointreau is a type of Triple Sec, but Triple Sec is also a product in itself. (Confused? Go to Cointreau vs Triple Sec).

The orange liqueur really rounds out the flavors here! When we tried this agave margarita without the triple sec, it tasted like something was missing. Add just ½ ounce and it makes a huge difference! If you don’t have it on hand you can feel free to omit it, but we highly recommend using it.

You can make the agave margarita as a single drink (see below), or you can also make it as a pitcher! A pitcher makes 8 drinks, and makes it much easier for entertaining so you don’t have to shake up new drinks. Here’s what to add to a pitcher:

Add them together and stir. Then pour into glasses and serve! Head to the recipe below for how to make the agave margarita: and let us know what you think of this special drink. We love it as a fun spin on our classic margarita.

When to serve an agave margarita

The agave margarita is perfectly sweet tart! It works as a:

This agave margarita recipe is sweetened to perfection with agave nectar, giving this classic cocktail a little upgrade!