8 Things We Learned Writing a Cookbook 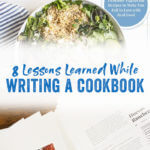 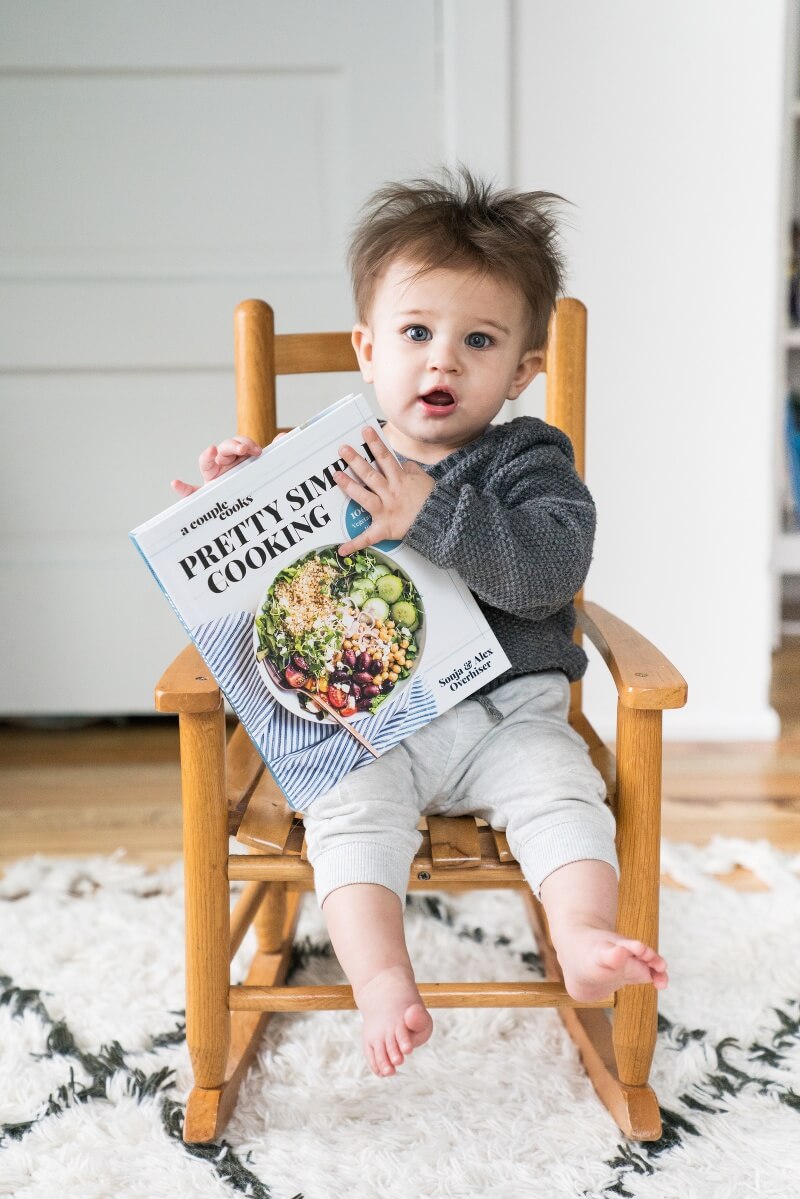 A cookbook on a shelf looks so matter of fact. Here I am, here are my recipes. From the outside, it looks like everything was perfectly planned and executed. But the back story, that’s where it gets interesting: smeared and splattered kitchens, spreadsheets, late nights, nixed recipes, and lost sleep. What’s it like to produce a 100 recipe, full-color photographed cookbook?

It’s a total LABOR OF LOVE.

Oh yeah, and Alex and I brought home a newborn baby in the middle of all that (!). With a few days until our new Pretty Simple Cooking cookbook launches (February 6!), we’ve been reflecting on a few things we learned from writing a cookbook, having a baby, and surviving to tell the story.

Cookbooks published the traditional route—with a publisher, not self-published—take a long time. Years. This is something that Alex and I didn’t fully appreciate until we entered into the process. It’s been four long years from the spark of an idea to seeing the actual book on paper.

Have you ever dreamed up and thrown yourself into a huge project? Are you as impatient as I am in wanting to see the results of your labor? When you take the risk to commit to a huge project, it can take years and feel incredibly slow going. That first agent gave us a No. It didn’t mean our book dream couldn’t someday be a reality. It meant we had to continue to believe in the project, and keep waiting for someone to come along who would believe it too. 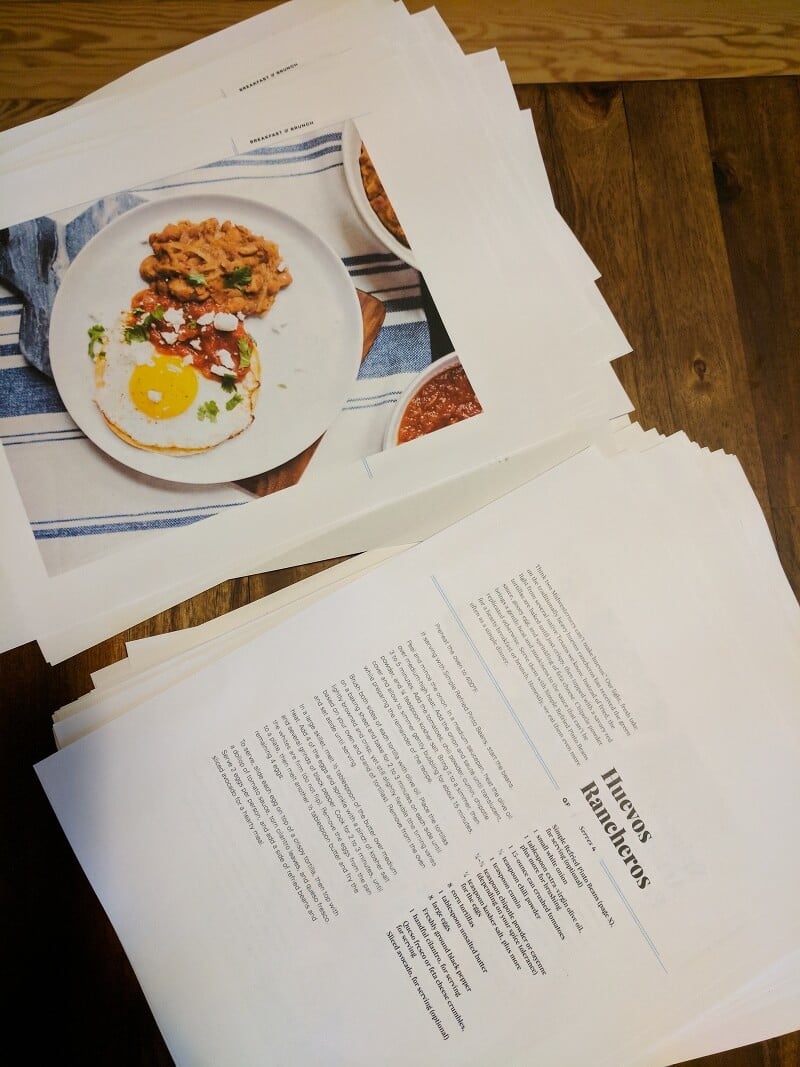 Unfortunately, this book was not Alex and my main gig. It wasn’t even our side gig. It was our side-side hustle. During the year that we wrote the book, we had demanding day jobs and were running the A Couple Cooks blog, social media, and podcast. On top of that, we were trying to write a book.

What does hustle mean? It means being ultra organized. We had about 1 million planning spreadsheets. The main one was a spreadsheet that listed all the recipes with a corresponding status (Drafted, Tested, Photographed). Another key spreadsheet was a Google form where we organized and addressed feedback from hundreds of recipe testers. You see, writing a cookbook is about creativity, but it’s also about structure. There’s no way to create 100 tried and true recipes without it. 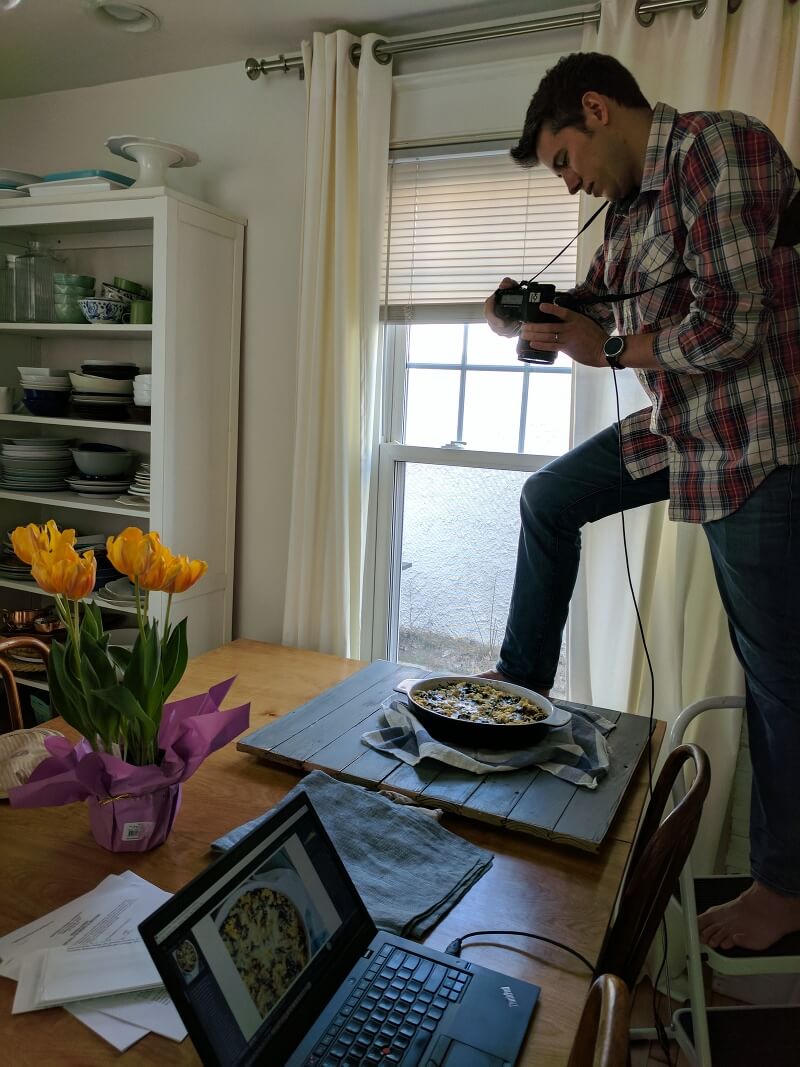 3.  While difficult, it can be life-giving.

In our personal lives, there was also a lot going on during this period. We started the adoption process a few months before we got our book deal. In the year between starting the book and completing it (March 2016-2017), we had three adoptions fall through. It was was a devastating year for us (I wrote about the process over on Coffee + Crumbs).

You’d think the side-side hustle would be overwhelming during a personal crisis: and in some ways, it was. In other ways, it provided a much needed distraction and outlet for creative energy. I’ve said before that “the book saved me” during that trying time period. For my personality, I need a meaningful project to be invested in that keeps me going, through good times and bad. This cookbook was that project for me. 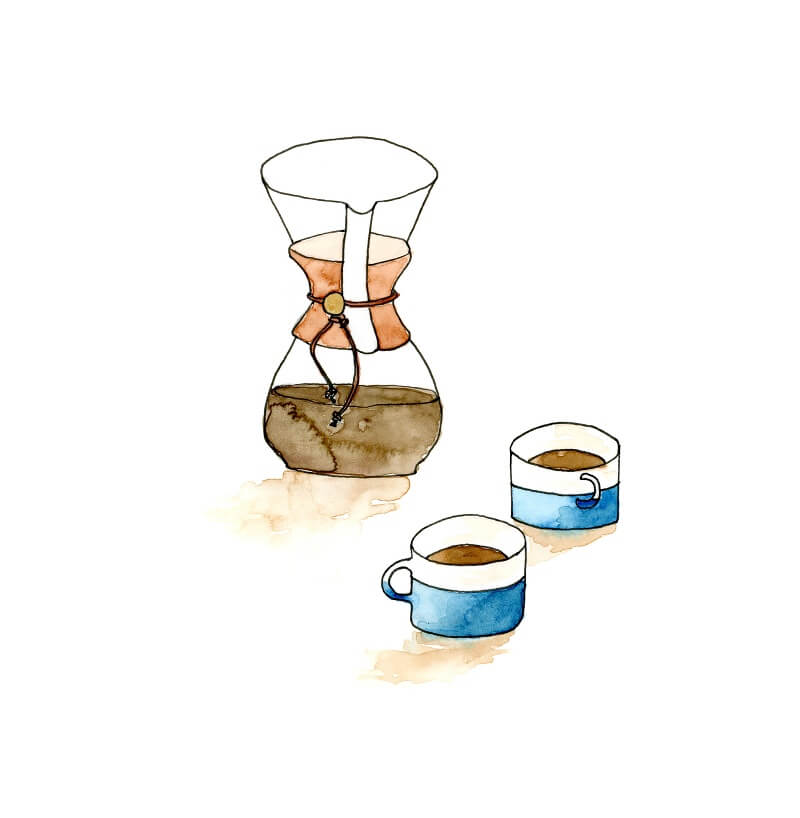 Prototype drawing to illustrate Slow down, one of the 10 life lessons, by Ashley Rodriguez

If you think that going about writing a book is about just writing down a lot of thoughts in your head, you’re wrong. It’s about writing down those thoughts, then re-writing, re-writing, and re-writing them again. You can’t get too attached to anything. A writing slogan we live by is that you have to “kill the darlings“. While it sounds harsh, it really means to let go of the wording or ideas that you love so much if they aren’t working. Let’s take our title for example—here is how it evolved over time:

There’s an immense amount of tweaking involved to find the words to get your point across in an intriguing yet precise way. Try doing that with 268 pages worth of content! Some things have got to go. 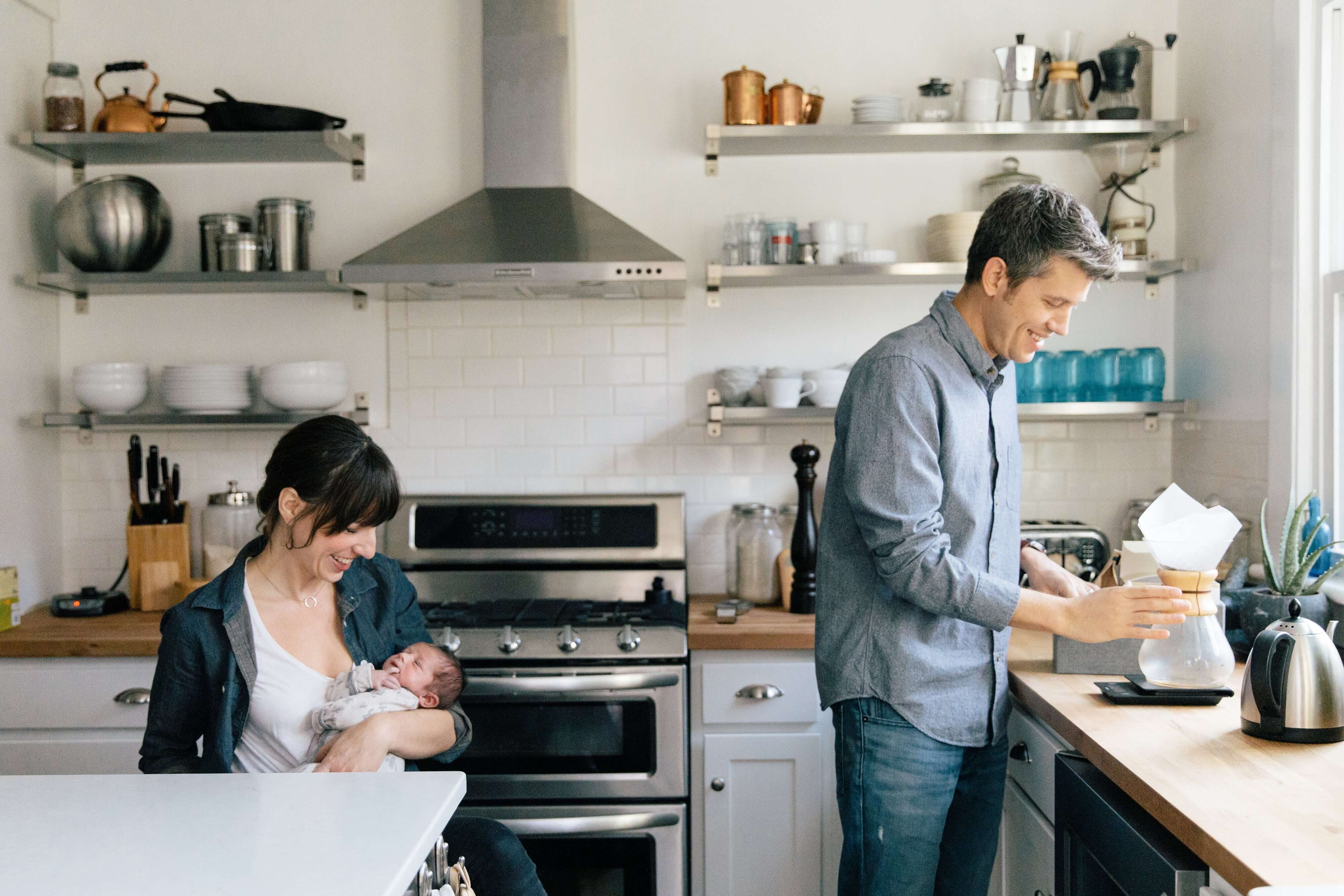 Speaking of babies (real ones), as the march towards our first draft deadline went on, so also did our adoption story. The draft was due on March 1, and we were matched with a birth mother due in late February. This, of course, made for some good jokes about both “babies” being due in the same time period.

Sure enough, on February 19, I was drinking my coffee starting at the manuscript when we received a call from the hospital. We packed our bags and our lives have never been the same. Larson Ames was born and we brought him home two days later. It was the single BEST thing that’s ever happened to us. (Cue the floodgates, I can barely write about it without tearing up. More on Larson’s story here.)

After the initial shock, we realized we had a newborn AND had to finish our manuscript and photos in 2 weeks! Luckily, babies sleep a lot. Every moment that Larson was sleeping, we were putting finishing touches on copy and recipes, and shooting the final photographs. I think we were mostly running on adrenaline and caffeine. Once we finished, two champagne toasts were in store: one for each baby! 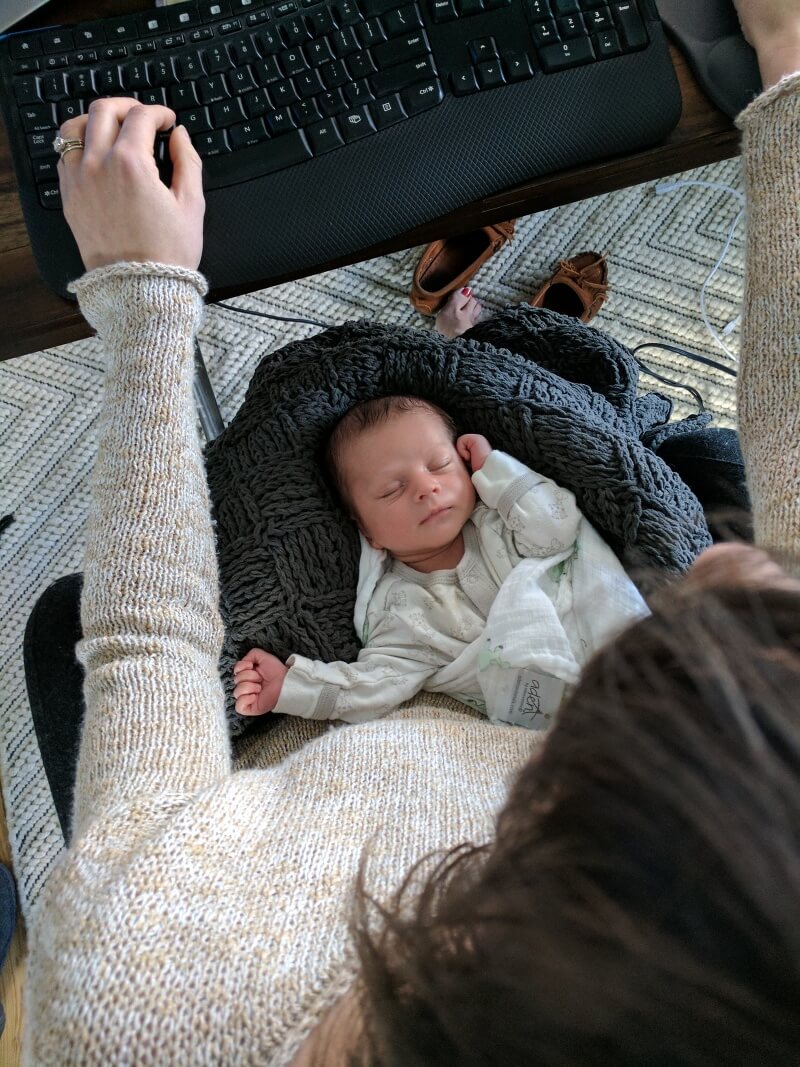 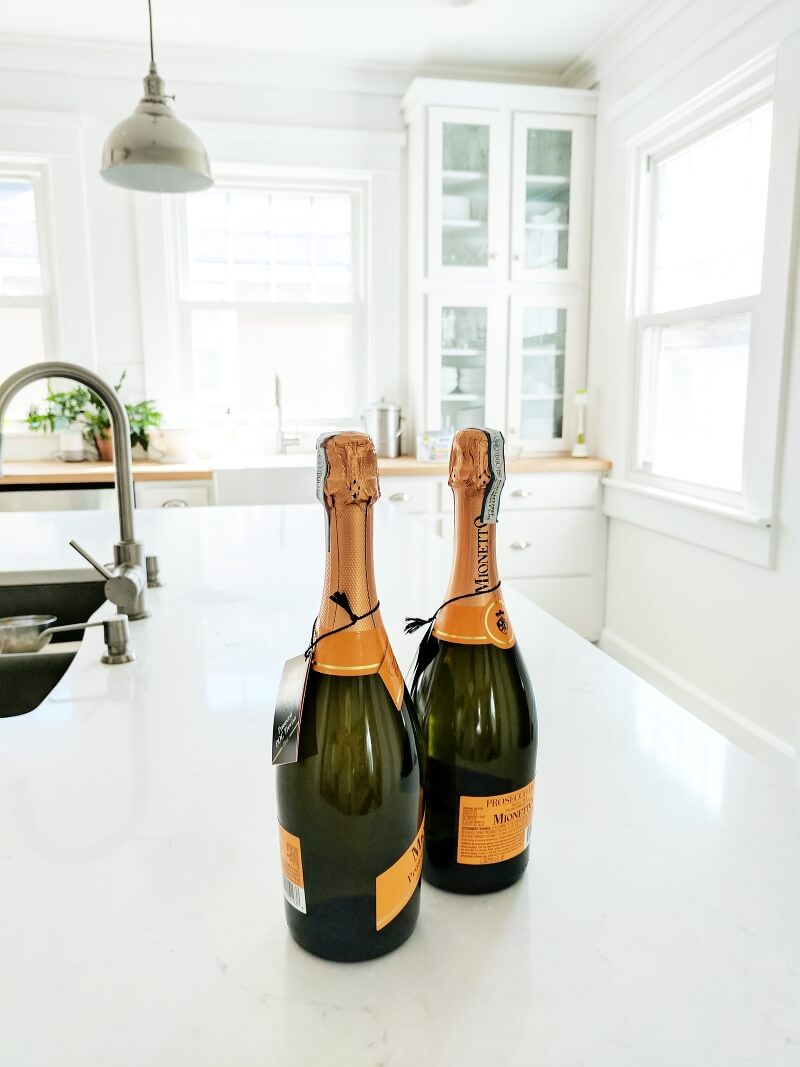 Champagne, one bottle each for the real baby and the book baby

Some of the recipes in this book worked the first time we tried them. Others bombed. In a cookbook proposal, you write down 100 concepts that you think will work. Many of them did, but others didn’t leave our test kitchen until they were something else altogether. When we thought a recipe was finished, we sent it to multiple real-life recipe test kitchens around the US and world. Then we held our breath.

Many times the feedback would come back good, but other times the testers found the recipe difficult or didn’t like the taste. Then it was back to the drawing board for us. As hard as it was to get negative feedback, it was some of the most important feedback that we received. We wanted these 100 recipes to be repeatable recipes that people loved and would make over and over again.

Here’s an example of the evolution of one recipe: 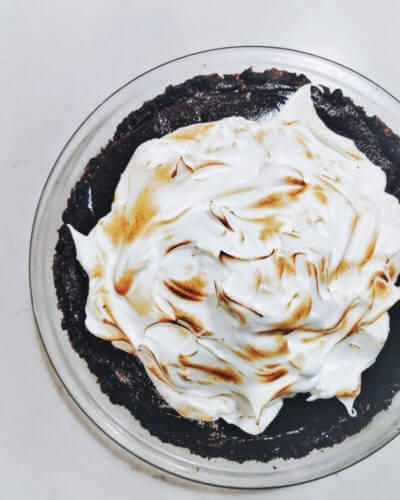 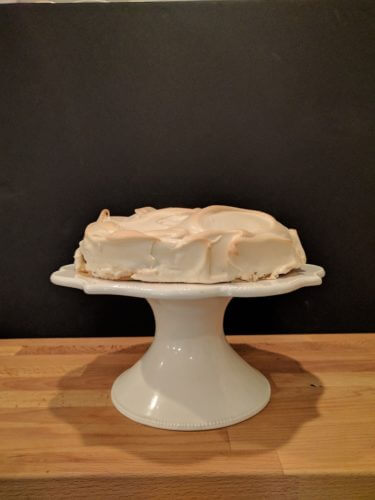 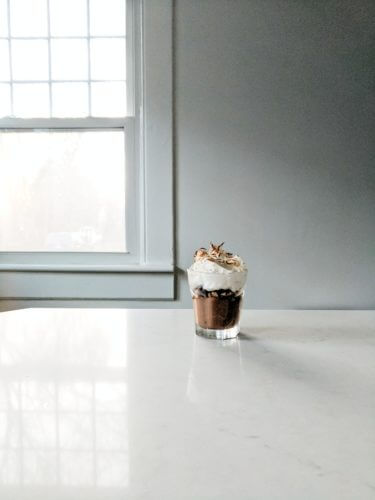 A cover is worth 1,000 words, so we knew our cover had to be spot on. It needed to relay beautiful and healthy, but accessible and inviting. It couldn’t be something with too much of a “vibe,” so pizza, tacos, and sandwiches were a no. It also needed to be colorful and stand out. With the help of our publisher, we narrowed it down to two choices, our Santorini Bowl and Cauliflower Curry.

In March 2017, we had a cover photo shoot. Seeing the beautiful colors of the Santorini Bowl, we knew that was the shot. We took multiple versions of the bowl with different towels and angles, then sent it to our publisher to mock up.

Da Capo came up with several different options, shown below. After many rounds of edits and tweaks, we fell in love with the “blueprint” concept, where blue lines ran through the cover. The designer mentioned that the blueprint lines mirrored the way our book was a “blueprint” for sustainably healthy cooking. YES! Making the title in a font similar to our logo was the last step to have a cover that we hope represents the book: a fun, healthy, joy-filled approach to cooking. 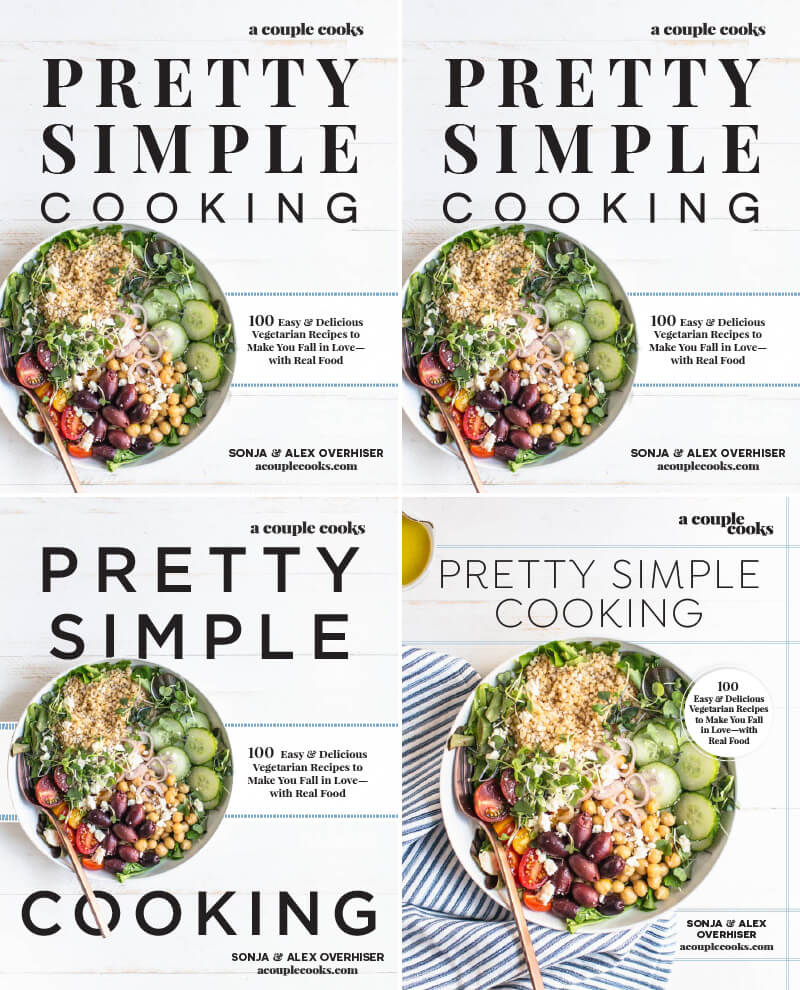 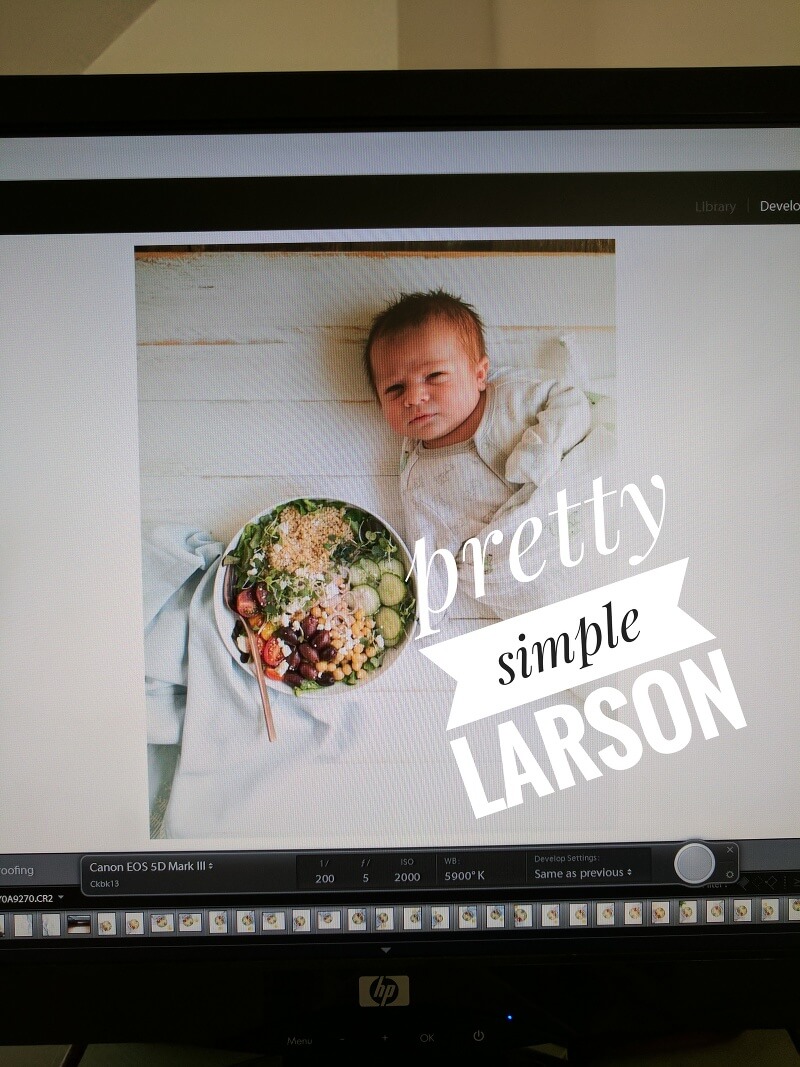 Larson worked his way into our cover shoot too!

8. Good friends are worth gold.

Because this was a side-side hustle (per Item 2), a huge community of friends and supporters helped us along the way. Friends and family would stop by during shooting days to eat get a meal or two in exchange for hand modeling and dishes help! Our friends Katelyn and Jared helped us brainstorm the title. (Such a silly way it came up, I can’t even share it.) Our summer intern, Claire, helped us proofread recipes and organize an army of recipe testers.

Speaking of recipe testers, the amount of gratitude we have for these extraordinary people cannot be expressed in words. These volunteers cooked our recipes, provided detailed feedback, and were our biggest cheerleaders during the process. Connecting with these new friends and supporters was one of the best parts of the book, and we feel confident that we’ve created recipes that these people love. We truly felt carried by community in the process—which is why we are elated to present you with: 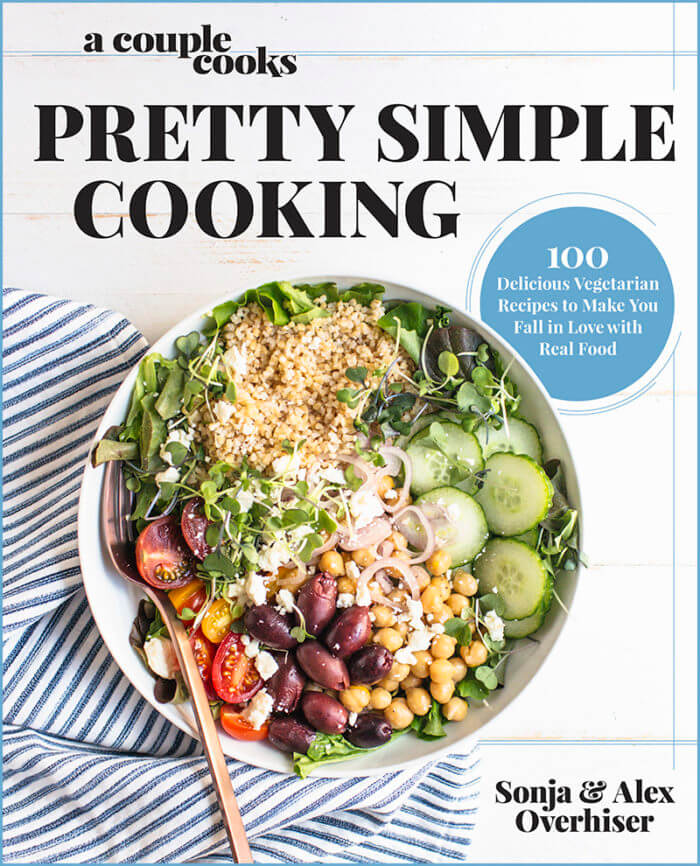